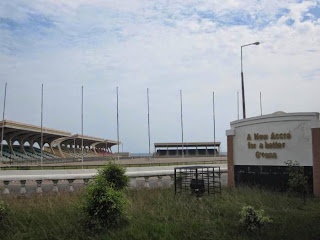 Ghana, you can make it!

I'm rooting for Ghana for tomorrow night firmly! Guys, do not be afraid of Germany! You can make it!
Eingestellt von Chris um 11:13 Keine Kommentare:

The U.S. Department of State and the Government of Ghana will be co-hosting a West African Cybersecurity and Cybercrime Workshop in Accra, January 29 - 31. Thomas Dukes, Senior Advisor to the Coordinator for Cyber Issues will lead the U.S. interagency delegation and provide opening remarks along with Ambassador Cretz and various representatives from the Government of Ghana. As the Internet, networked systems, and the use of mobile phones expand throughout sub-Saharan Africa, nations are grappling with multiplying cybercrime threats. This regional workshop, a partnership between the U.S. and Ghanaian Governments, will bring together Anglophone nations of West Africa to address issues such as mobile security, computer forensics, strengthening national laws, building emergency response teams and ensuring that comprehensive national cyber security plans promote internet freedom and respect for civil rights/civil liberties. In addition to the West African and U.S. participants, the Workshop will be attended by government officials from Kenya, Senegal, and South Africa, regional organizations such as the African Union and ECOWAS, and the private sector. Discussions will feature the importance of partnerships between government, the private sector, and citizens in addressing the challenges of cybersecurity and cybercrime. This workshop, a companion event to similar regional workshops held in July 2011 and September 2012 in Nairobi, Kenya and Dakar, Senegal, for, respectively, East African Community and Francophone ECOWAS member states, supports the State Department priority of promoting cybersecurity and cybercrime capacity building efforts across the globe. Media interested in covering this event should contact the Information Officer at the U.S. Embassy in Accra, Jeanne Clarke >>>link
Eingestellt von Chris um 10:55 Keine Kommentare: